1) Bacterial scourge Ref. For the locomotion organelles of most free-swimming bacteria. F. are extracellular appendages that are anchored in the plasma membrane and cell wall and are therefore not surrounded by the plasma membrane like eukaryotic F. (see Fig.). Bacterial flagella are divided into three morphological and functional sections, which are called Flagellum filament, Scourge hook and basal anchoring complex are designated. The flagellum filament, with a length of approx. 20 μm many times longer than the bacterial cell itself, consists of a single protein (flagellin), the globular monomers of which are assembled into a tubular quaternary structure only approx. 20 nm in diameter. A complex of four rings of globular proteins in gram-negative bacteria and two rings in gram-positive bacteria ensures that the extracellular F. is anchored in the bacterial cell wall and membrane. The outer complex of one or two rings is inserted freely rotatable into a corresponding opening in the multilayer cell wall. The middle ring (Stator or S-ring) consists of a ring of integral proteins of the bacterial membrane and forms a channel in this for the passage of the flagella axis, while the terminal ring (Rotor- or R ring) forms the end of the flagella axis. This basal anchoring complex is also the motor for the rotating movement of the F., which is reminiscent of a rotating ship's propeller. The rotation comes through an inward one Proton flux comes about, the required proton gradient being generated by proton pumps. Bacteria like Escherichia coli and Salmonella typhimurium have left-handed F., whereas with Rhizobium meliloti the F. are right-handed. At Salmonella typhimurium rotate the F. up to 20,000 times per minute counterclockwise and can reach speeds of up to 30μm per second (Thrust scourge)., with Escherichia coli the F. make 3600 revolutions per minute. If, on the other hand, the flagella rotate clockwise, a kind of tumbling motion occurs on the spot. In this way a change of direction is possible (chemotaxis). (see fig.)

2) Ref. For the organelles responsible for the locomotion of eukaryotic cells (protozoa, algae) and sperm. In contrast to cilia, they are usually significantly longer than the cells and occur in fewer numbers. The F. eukaryotic cells are surrounded by the plasma membrane and show in cross section a typical 9 + 2 pattern of nine peripheral double tubules and two central single tubules (axoneme). The movement of F. is caused by microtubules sliding past each other and the associated bend inside. A number of auxiliary proteins (e.g. Dyneine) involved, which ensure the cross-linking of the microtubules and the generation of force in the bend (scourge blow). 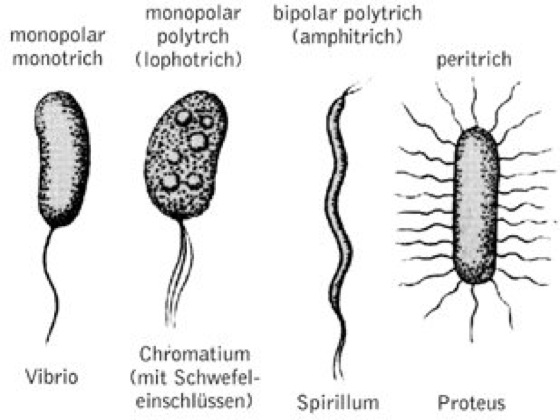 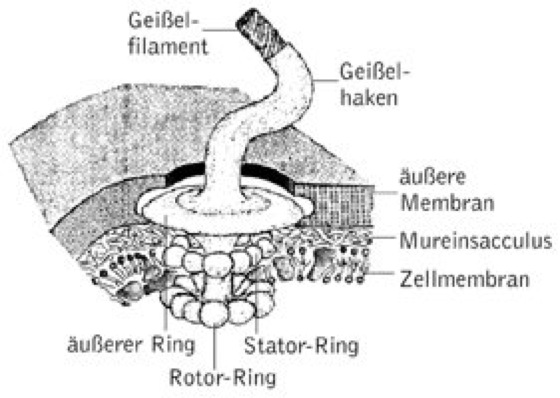 Flagella: Model of the flagella motor of a gram-negative bacterium