Hoohaw is where the heart flows

The First Chakra, called the Muladhara (Root Support), is located between the anus and the penis at the base of the spine. It contains the Mystic Energy of the Shakti or Kundalini (Serpent Force). The Kundalini is coiled three and a half times around a central Lingam - the Shiva Lingam - a phallic energy source that is contained in the Muladhara Chakra. The Kundalini is asleep and inactive until this chakra is energized and opened through the work of initiation. The Muladhara Chakra (Lotus of 4 Petals) corresponds with the Planet Saturn, the Element of Earth (Prithivi Tattwa), Alchemical Lead, and the Atu of Thoth called “The Universe” or “The World”. Its special symbol is the square; its Hindu Deity (God) is Brahma; its Shakti (Goddess) is Dakini or Savitri; and its Bija (Seed or Root Letter) is LAM.

The Second Chakra is called Svadhisthana (One’s own Place), and is located on the spine directly behind the area about one inch below the navel. The Svadhisthana Chakra (Lotus of 6 Petals) corresponds with the Planet Mars, the Element of Water (Apas Tattwa), Alchemical Iron, and the Atu of Thoth called "The Tower." Its special symbol is the Crescent Moon; its Hindu Deity is Vishnu (Hari); its Shakti is Rakini; and its Bija is VAM.

The Third Chakra is called Manipura (Jewel City), and is located on the spine at the height of the solar plexus. The Manipura Chakra (Lotus of 10 Petals) corresponds with the Planet Jupiter, the Element of Fire (Tejas or Agni Tattwa), Alchemical Tin, and the Atu of Thoth called “Fortune” or “The Wheel of Fortune”. Its special symbol is the triangle; its Hindu Deity is Rudra; its Shakti is Lakini; and its Bija is RAM.

The Fourth Chakra is called Anahata (Unstruck Sound), and is located on the spine at the height of the heart. The Anahata Chakra (Lotus of 12 Petals) corresponds with the Sun (or the Planet Mercury), the Element of Air (Vayu Tattwa), Alchemical Gold (or Mercury), and the Atu of Thoth called “The Sun” (or “The Magus ”). Its special symbol is the Circle or Hexagon; its Hindu Deity is Isha; its Shakti is Kakini;
and its Bija is YAM.

The Fifth Chakra is called Visuddha or Vishuddhi (Purity), and is located on the spine at the height of the throat. The Vishuddhi Chakra (Lotus of 16 Petals) corresponds with the Planet Venus, the Element of Spirit (Akasha Tattwa), Alchemical Copper, and the Atu of Thoth called “The Empress”. Its special symbol is the Egg; its Hindu Deity is Sada-Shiva; its Shakti is Shakini; and its Bija is HAM.

The Sixth Chakra is called Ajna (Command Center), and is located behind the area between the eyebrows, in the pineal center of the brain. This is the third eye. The Ajna Chakra (Lotus of 2 Petals) corresponds with the Moon, the Element of Mind (Manas Tattwa), Alchemical Silver, and the Atu of Thoth called "The Priestess." Its special symbol is the eye; its Hindu Deity is Parama-Shiva; its Shakti is Hakini; and its Bija is O (Pranava).

The Seventh Chakra is the Sahasrara or Brahmarandhra. It is symbolically located above the head and represents, among many others things, the continuation of the Force of Kundalini beyond that of the physical being. This is the mystical sphere of Cosmic Consciousness, the Invisible Throne of Enlightenment, and the Ultimate Place of Union between Shiva and Shakti. It is the supreme dwelling place of Shiva, “whiter than the full moon”. In this highest Chakra there exists a great Triangle of Mystery, in the center of which there is a great Void (Shunya), the symbol of the Supreme and Formless Light. The Sahasrara Chakra, or Lotus of 1,000 Petals (or more correctly 1,001 Petals), corresponds with the Planet Mercury (or the Sun), Alchemical Mercury (or Gold), and the Atu of Thoth called “The Magician” (or “The Sun ”). Its special symbol is the Crown; its Hindu Deity is Parabrahma. The fifty letters of the Sanskrit alphabet, from A to La, go round and round, twenty times, the thousand petals of the Sahasrara Chakra. The Sahasrara is not really a Chakra or Lotus; it is rather a metaphorical center of the Infinite.

It is very important to cure unhealthy chakras. We can influence our chakras, our health, and our lives by using different techniques such as: 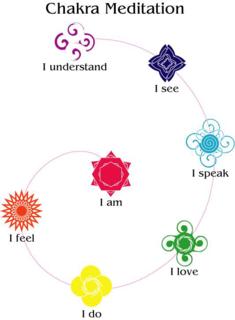 When you feel stress in your consciousness, you feel it in the chakra associated with that part of your consciousness and in the parts of the physical body. Everything can be healed so in understanding the chakras, the healing process can begin with the body and the mind.

The 7 chakras or the human energy field


Everything that lives pulsates with energy, and that energy contains information. Even some quantum physicists acknowledge the existence of a fine electromagnetic field generated by the body's own processes. Our material body is surrounded by an energy field, which is both an information center and a highly sensitive system of perception.

So we take in all impressions of our environment through our senses and store them in our body. There are different energetic centers for this, which are called chakras in Indian culture, but the knowledge of the power centers in the body existed in many cultures. These centers have a strong influence on the health of our physical body and our nerve plexuses and are related to a certain sense or element. In chakra yoga these centers are energetically charged and harmonized, with which we can keep our body and mind healthy. Each chakra is already created at birth, but it is further developed in a certain phase of life.

The journey begins at the base of our spine. The first chakra is located in the body on the dam, the seat of our vital physical strength, and connects people with the earth. This chakra is the basis of emotional and mental health. Emotional and psychological stability have their origin in the feeling of togetherness, of basic trust. (1-7 years of age)
The root chakra influences the glandular system of our adrenal glands and regulates the production of cortisone, adrenaline and noradrenaline. It is also associated with the coccyx, bones, colon, nails and teeth and promotes their health.


The second chakra
(Sense of taste and body awareness)

Sacral chakra or the energy of relationships

The second chakra is located below the navel and corresponds to the element water. The energy of the second chakra symbolizes lust for life, sensuality, sexuality and creativity. It takes care of reproduction both physically and mentally. (7-14 years of age)
The sacral chakra influences the testes and ovaries and regulates the production of the hormones estrogen and testosterone. Furthermore, it is in connection with the entire sexual organs, the kidneys and the bladder as well as the blood circulation and promotes their activity and health.


The third chakra
(Sense of sight and emotionality)

The third chakra lies in the area of ​​the solar plexus nerve plexus and is associated with the element fire. Our personality begins to develop in its energy and symbolizes the transition from childhood to the adult self. It is one of the most important energy stores and ensures healthy self-confidence. (14-21 years of age)
The solar plexus chakra influences the pancreas and its insulin production and digestive enzymes. It is related to the stomach, small intestine, liver and autonomic nervous system and promotes their health and activity.


The fourth chakra
(Sense of touch and compassion)

The third chakra is at the level of our heart and is related to the element of air. The energy of this chakra is therefore able to touch everything. The most powerful energy flows out of the heart chakra, that force that is able to penetrate everything and turn it for the better. The power of love. (21-28 years of age)
The heart chakra influences the thymus gland and the immune system. It is related to the heart, lungs, blood, arms and hands and promotes their health.


The fifth chakra
(Hearing and communication)

The fifth chakra is located in the area of ​​the throat and is related to the element ether or space. The main theme of this chakra is communication - both internal and external communication. The energy of this chakra enables us to put our thoughts into words so that others can understand what we want. Honesty and truthfulness towards ourselves and others is the prerequisite for successful communication. (28th - 35th year of life)
The throat chakra influences the thyroid and parathyroid glands and is related to the throat, larynx, esophagus and trachea, as well as the neck, shoulder and jaw. It ensures good health in this area too.

The sixth chakra is in the forehead region, between the eyebrows. The energy of the sixth chakra is the source of intuition, imagination and immediate perception. It is the chakra of wisdom and connects us with the spiritual world. This is also where the human relaxation and concentration center is located. (35 - 42 years of age)
The forehead chakra influences the pituitary gland, the pituitary gland and is connected to the cerebellum, the nervous system, the endocrine system, the eyes, ears, the nose and the sinuses. Here it ensures good activity and health.

The seventh chakra is at the apex of the head, said to be beyond the outer limits of the body. The main themes of the crown chakra, the so-called gateway to higher consciousness, are spirituality, self-realization and enlightenment. The crown chakra enables the beginning of a spiritual journey into our unconscious, with the aim of making the unconscious conscious. The crown chakra has an influence on all underlying chakras and is an exercise in meditation to harmonize all energy centers. (42 - 49 years of age)
The crown chakra influences the pineal gland or epiphysis and its production of serotonin and melatonin. It is related to the brain and the whole of the organism