Review: Jules Werner "All My Friends And Me"

Debut EP Jules Werner "All My Friends And Me" 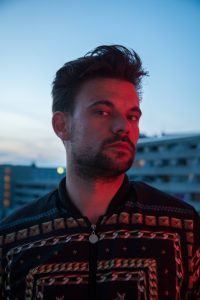 Jules Werner "All My Friends And I" EP

I listened to Jules Werner's debut EP and here's how it turned out.

On January 18 The first EP by Munich pop musician Jules Werner was released with “Alle mein Freunde und Ich”. It's the first exclamation point. The first movement, seen in this way, is also the first step towards a solo career. Jules Werner is an artificial name for the project that seems to get lost in the five tracks. A colorful mix of autotune and trap and then there's that unconventional pop appeal.

Annoyed by synths and drum machines, this is exactly the kind of music that emerged. More against the beat, more droning and lyrics that make you think. It's not about drugs, women or other stuff that hip-hop artists devote themselves to these days. Everything seems gloomy and thoughtful. I almost confused him with Marteria in “Trappist-1”. A really nice warm voice that was covered with autotune, but this time it has a certain warmth and depth that you can't really grasp.

Really really like with “Sofia Coppola”. This is where a beat and a sample comes in, which is so rough. Somewhere between science fiction and passages that make me think a lot. The last time I heard “Sofia Coppola” on the S-Bahn, I was immediately drawn into a certain flow. He deliberately didn't feel like his predecessors anymore, who may have exhausted Autotune well, but lyrically tended to stand still.

In every song on the EP, Jules Werner meets a new, fictional person. He helps that person to free them from a lack of freedom - as he himself says in an interview at PULS. Still, the tracks don't stay heroic or as an aid to tricky situations. The tracks make me more satisfied, they leave me with the certainty that pop from Germany is finally daring a little. It shows me as a listener that there are still fresh beats and influences that don't have to be reinvented to be cool. For me one of the best releases so far this year.