When we met Blogspot

Finally it was that time again: out of the home office and into the paint pots! And nowhere can you dye better than at Marion, as there is plenty of space there. The last dyeing was four years ago, hard to believe.

After seeing each other for the last time in March, there was of course so much to talk about; until it went all out: The program included dyeing with synthetic acid dyes as well as with vegetable dyes. 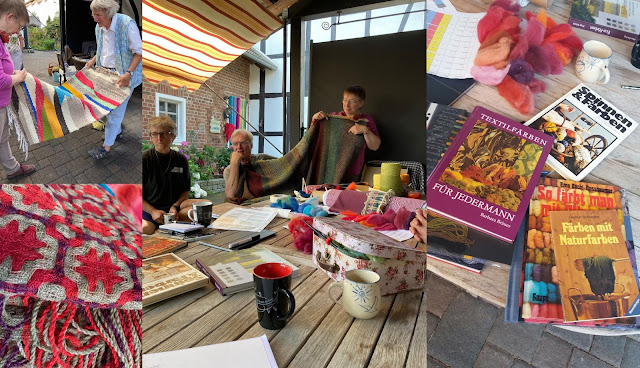 Here is some information about dyeing animal fibers (wool and silk) with vegetable dyes,
using the example of the dye drug reed flowers:

When dyeing with vegetable dyeing materials, the wool must first be stained:
The metal molecules of the stain attach to the fibers. The color molecules can now dock to this. They enter into an insoluble bond, which is also referred to as laking. As with Karin Tegeler (click!) learned, I use the modern one Aluminum cold pickling according to Johannes HarbothOn the one hand it is gentle on fibers and on the other hand it is environmentally friendly.

The cleaned wool fibers or yarns are placed in the stain for 8-12 hours and then rinsed with clear water. This is necessary because otherwise the dye molecules in the subsequent dye bath would also hang onto the floating stain molecules that are not connected to the fiber and fall to the ground. Fewer dye molecules would therefore be available for the actual dyeing process.

The stained wool can:

Source of supply for the cold stain: e.g. das-wollschaf.de (instructions are included and are really simple)

The time of harvest determines the color that can be achieved. With an early harvest, before the panicles turn red, a very intense shade of yellow can be obtained. However, if you want to achieve green tones, the panicles must first turn red. 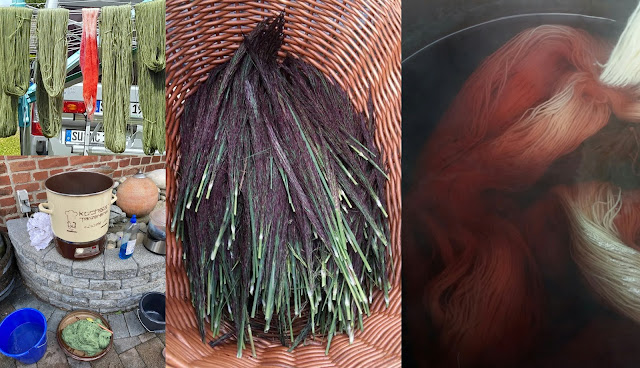 The reed flowers are boiled for 1-2 hours. The resulting dye liquor is passed through a close-meshed net in order to filter out the dye material. The material is integrated into the net and can later be used with the dyeing in order to increase the color yield. For the sake of simplicity, we worked without a net and then fished out the boiled reed flowers.

Amazingly, the dye liquor turns red and the inserted fibers then turn green!

Before the fibers get into the dye liquor, two things should be observed:

Put the stained and rinsed wool in the liquor with the same temperature as possible and slowly heat it up to a maximum of 90 ° C, leaving it in the liquor until the desired depth of color is achieved. With some dye drugs, the temperature of the dye liquor has an impact on the color that is achieved!

We have colored a total of three trains, 1st train 2 strands, 2nd train 2 strands and in the 3rd train 1 strand. The color depths achieved were quite close together, so much dye was in the liquor. At home I continued to dye three of the strands. First over-coloring with tansy and then darkening with iron vinegar (see below):

In the middle part of the picture you can see from left to right:

Then the wool should cool down slowly on its own and only then be washed out. Or put in another container with tempered water if you want to continue dyeing in the liquor. Because after the so-called "first move" any more can follow as long as there are still dye particles in the fleet.

We made a total of three moves and there was still "paint left". The wool can then be put in an acidic vinegar bath, since wool loves acids.

The wool is removed from the dye liquor, iron vinegar is added to the liquor if desired, and the wool is inserted again until the desired color is achieved. However, the wool loses some of its softness😩.

The iron vinegar can be prepared as follows: Put a handful of iron nails (uncoated) or better steel wool in a screw-top jar, add 10 ml of vinegar essence, fill up with clear water and leave to stand. If a rusty precipitate can be seen, iron has dissolved in the vinegar bath and the iron vinegar can be used.

And here is the other "construction site", dyeing with acid dyes:

Armed with brushes and syringes, the colors were applied to the fibers, wrapped in foil and then fixed in the steamer. In this way, a targeted color distribution can be achieved.

If you want to bring a little more chance into play, you can also apply the color directly in a so-called pot coloring.

So it gradually became more and more colorful. Strands of yarn, warps and slivers of tops migrated one after the other into the pot or steamer. Then it went into the spin dryer and off the leash! Acid colors are fixed by heat. Some also dye in the microwave; However, it may then no longer be used for food.

Fixing in the microwave is supposed to be faster, but it also doesn't fit as much material to be dyed at once as e.g. in a steam oven. Professional (more) dyers probably also use dyeing trays. Of course, there is a lot more going in at once.

As the saying goes, many roads lead to Rome! There are also many ways of dyeing with acid dyes. Oh yes, they are called acid colors because the whole thing only works in an acidic environment, e.g. with the addition of vinegar essence. And acid color is then probably not the same as acid color. Depending on the provider, the colors will be different. Above all, red is not always red!

If you want to know more about it: youtube also shows you the world here:
Dyeing with acid dyes on youtube

Or the best-known standard work in book form:
1000 colors on wool and silk

In any case, one thing is clear: caution is advised, dyeing can be addicting!