The term “early Middle Ages” describes the transition from late antiquity to the Middle Ages. It covers the period from the 5th to the 11th century. The beginning of the early Middle Ages was accompanied by two significant developments. On the one hand, these were the migrations of peoples. On the other hand, the collapse of the Roman Empire with the deposition of the last Roman emperor in 476 played an important role. The end of the Roman Empire also meant the end of Roman rule over large parts of Europe. But almost all subsequent rulers continued to refer to the Roman Empire to legitimize their rule.

The influence of various invading peoples

The remains of the Roman infrastructure were largely removed only through various events. These included the Viking raids, which had a major impact on society, the economy and politics in large parts of Europe. The invasion of the Magyars in Western Europe also meant a confrontation of the ancient Roman sites with a destructive force that was only stopped in 955 by Otto I. Far more threatening for western civilization was the conquest of North Africa and the Iberian Peninsula by the Muslim Arabs. More about the Magyars ..., more about the Arabs in the early Middle Ages ...

Political influence by the Merovingians and Carolingians

The entire epoch of the early Middle Ages was politically shaped by the Merovingians and Carolingians. Building on the remains of the Roman Empire and the early Germanic empires (Alemanni, Lombards and Goths), they formed the Franconian Empire. Another significant element that supported the ruling Carolingian dynasty was the common currency used throughout Europe. At the end of the 8th century, Charlemagne standardized the silver denarius in his second coin reform, which was around 1.7 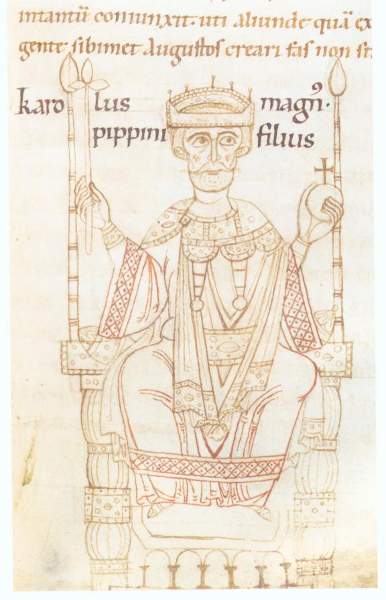 Gram weighed. This coin was a recognized and popular currency well into the 13th century. More about the Merovingians ..., more about the Carolingians ...

The balance of power within society in the early Middle Ages

The mediaeval relations of domination and power that now formed were essentially a summation of associations of persons in Germanic tradition: tribes, clans, followers, feudal courts, communities of houses and oaths. There was no conceptual distinction between public authority and private legal authority. In medieval rule (dominium) the two flowed together inextricably. This arose from the male head of household's power of disposal and rulership over land and the people living on it (familia). At the head of the state stood the king, who in turn was in close contact with the Christian church, which upgraded and supported his position through the consecration of the kings (anointing).

The social structure was characterized by an agricultural society, which was still not very differentiated in terms of division of labor, and which lived mainly on natural economy. At the same time, both the money economy and trade lost a large part of their importance compared with the Roman Empire. The higher clergy and the nobility made their lives extremely splendid throughout. On the other hand, there was the often bitter poverty of the lower classes living in the countryside, who made up 90 percent of the population.

Disintegration of the state order

In many areas, after the collapse of the Roman Empire, only the institution of the church remained as the overriding state power. This was at the same time a carrier of culture and education. In particular, the monasteries, where monks and nuns who were capable of reading and writing lived, ensured that these skills were passed on.

The Spiritual Significance of the Roman Empire

The spiritual significance of the Roman Empire was never completely lost in the early Middle Ages. The successor states and their rulers made constant reference to Roman culture so that their spirit lived on. The nobility tried to legitimize their rule by referring to the Roman Empire. Charlemagne, for example, was crowned Roman emperor in Rome. He was thus a direct successor to the Roman Caesars.

The missionary work and Christianization of parts of Europe that were still pagan are still considered to be an important link in early medieval Europe. The Christian doctrine of salvation found its expression even in the world of the Germanic peoples without writing. With the appropriation of writing and ancient culture, the Germanic tribes overcame older levels of culture. As a result, extensive changes became apparent in all areas of life, such as the exercise of law and order. More on this...

Latin as a connecting script and reform of the written language

The fact that classical Latin served as a written language not only in the church, but also in monastery and cathedral schools, also brought people and countries together. Latin was not only available to clerics but also to interested laypeople for communication. With the so-called Carolingian minuscule, a reform of the written language was introduced. It has only a few ligatures (letter combinations) and abbreviations and shows a clear word separation. This font prevailed across Europe and is still valid today.

The rise of the Franconian Empire and its collapse determined the face of Europe today. Many of the current nation-states have existed in roughly the same geographical location since that time. Charlemagne is not wrongly considered the father of Europe, because France later emerged from the western half of the crumbling Franconian Empire, and the eastern half became the Holy Roman Empire of the German Nation.