How to catch mullet while patch-fishing 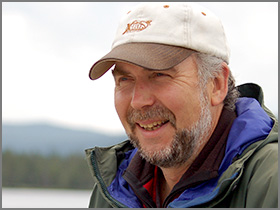 Sorry, this essay is only available in German language:

Yes, in the past, everything was better there. Stop! That's not true. When I was a student, I had what was then a modern “Ugly Stick”, somehow a fly rod, but: A Schwabbelding, really ugly, I tell you! There are no such monsters anymore. Luckily. No fly fishing events, only very few specialty shops with a mini selection - so stop the general nostalgia.

Then maybe it was better 100 years ago? Neither. The fly rod (split), the fly line (silk) - these were products for the uppermost upper class. Insanely expensive, just not feasible for normal people. Fly fishing - a pastime for chief physician-doctor-doctor or for the nobility. Or money nobility.

There were perhaps more fish on average. Eels, for example, but they don't get us anywhere fly fishing. Grayling? Yes, everything was really better back then, you have to honestly say. Sea trout and salmon? Well, you have to look carefully. Here in Germany, a lot has changed for the better. It remains to be seen whether the salmon will really play a role again in the foreseeable future as a target fish that can be specifically caught. But it doesn't matter either, because the fact is: there are more and more people who take care of it, thank you very much! It looks even better with the sea trout. The reintroduction is going very well in many rivers from the Rhineland to Schleswig-Holstein. And whoever fishes hard, catches one every now and then. Great!
Hartwig Hahn from Aukrug-Homfeld in Schleswig-Holstein was one of the first re-citizens (and still very active today). I've known him for 25 years, but he has been working around the maintenance of our sea trout and salmon for 40 years! This year he received the Federal Cross of Merit for his work, but in a certain sense also on behalf of all committed anglers who care about the fish. This is great and should make us all a little more confident. We do a lot; one should also talk about it offensively! More and more celebrities are professing our passion. There are many new ones. What's more popular than soccer? Nothing. That's why it's nice when Horst Hrubesch is "one of us" (good fly fisherman!), As well as Patrick Owomoyela, whom I met this year (nice guy and really crazy about fly fishing) or Miro Klose, who is a quiet, intense connoisseur of Flying fish woad is, as a good friend told me confidentially. There are really a lot of real guys, including tough guys, in our guild. I recently heard reliably that Rammstein frontman Till Lindemann likes to fish for sea trout. Would you have thought that?

All good news, no fake news!
We should keep this in mind when we consider our current situation. Much, even very much, is better today than it used to be: the equipment, the information (internet, magazines, books), the travel options and, in general, the level of fly fishing is much higher than it used to be. The target fish in the past: trout, grayling, salmon - out. Today: the named ones, but plus pike, garfish, carp, barbel, mullet, chub, huchen, bonefish, tarpon and so much more.

Lamenting is easy, anyone can do it. Feeling joy, that has to be learned.
Sometimes it helps to take a closer look.