What is partial reflection and refraction experiments

The partial reflection is a not to be overlooked indication that the previous thought model of the sciences is inadequate. This does not explain this everyday experience.

It cannot be explained in particular because it is assumed that photons are individual particles (quanta) and that these particles are all exactly the same.

Facts in the physical world model

The following facts have been sufficiently proven. They are considered irrefutable truths. To simplify matters, we only use light with one wavelength, i.e. one color. However, the statements apply to all wavelengths. But it simplifies the considerations. 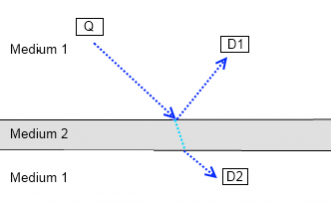 The percentage of photons that decide to reflect is statistically constant if the thickness of the medium 2 is constant.

It is independent of whether only a few photons are emitted per second or a very large number.

What is a reflection? The reflection of a photon can only be an interaction with an electron, atom or molecule of medium 2. This interaction is called scattering.

After all, this means that every photon must decide at the latest at the interface whether it wants to reflect or not.

It can also be assumed that the individual photon does not know how many photons have already been reflected in the past and how many have penetrated into the medium 2.

Each photon would have to have knowledge of other matter entities in its active space so that the thickness of the medium 2 can have an impact on the path taken by the individual photon.

However, it cannot be proven either that the individual photon really simply reflects at the interface with medium 2. It is much more likely that every photon when it hits medium 2 is absorbed by an atom or molecule in the medium. And that another photon with the same energy is then emitted again.

In total, we get the test results.

The final theory assumes that all entities in the universe are spiritual entities. Space is a primal idea that is aware of all matter entities.

The frequency of the photons is interpreted as the step length with which the photon can change its location.

A change of location only happens through a change in one's own local awareness, relative to others.

If the effective spaces of two particles touch, then they may have a conflict that they have to resolve according to their goals (instincts).

The theory of being provides the framework to find these explanations.

In the case of partial reflection, the theory of being assumes that the incident photons are entangled with the respective atoms or molecules and thus subordinate themselves to the goals of the atom or molecule. The atom, in turn, is entangled with the atomic lattice of the overall medium in which it is integrated.

The impinging photon is a disturbance to the goal of the grating to maintain its system stability. The atom tries to compensate for the disturbance by emitting an equivalent photon in order to minimize the disturbance.

Based on the thickness of the lattice, it follows that some photons are emitted outwards from the first atom and others inwards to other atoms, which in turn emit photons accordingly in order to minimize the disturbance. The result is the familiar division of reflections and passages.

It remains to be clarified which restrictions in the degrees of freedom of the entities involved result in the division of the reflections and passages.