How to Watch DVD Movies on Netflix

The horror thriller “Things Heard & Seen” is about a toxic marriage and ghosts. The two storylines overlap each other. 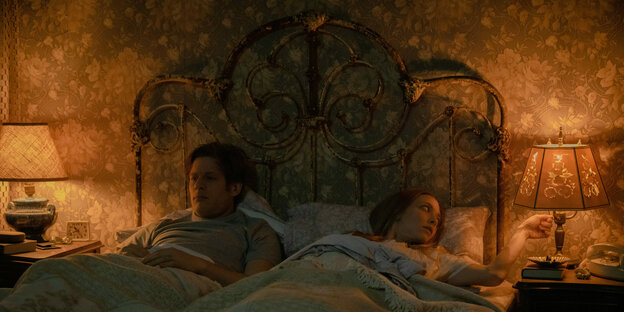 Man is an angel to man. Or a demon after all. In “Things Heard & Seen” everything is related to everything: Heaven, Hell and the ominous in-between, in which not only the outer people but also the inner ones, the souls of the deceased, cavort. Strictly speaking, they are not dead at all, but more alive than the living - with the removal of their carnal shell they simply assumed the purest form of being.

The world of this horror thriller, which is based on the novel "All Things Cease to Appear" by Elizabeth Brundage, functions as it was described by Emanuel von Swedenborg in his theosophical writings in the second half of his life in the middle of the 18th century. The Swedish mystic, who had previously earned a reputation as a scientist, turned to a Christian-charged spiritualism after an alleged spiritual awakening experience.

In his central work, titled "Heaven and Its Wonders and Hell From Things Heard and Seen" in English, which is seen and recited several times in the film, Swedenborg describes heaven and hell as a state of mind that spirits assume, depending on whether they have mainly done "good" or "bad" during their earthly life.

When the Clare couple moved into their new home in a small, rural town in Upstate New York in the spring of 1980, little did they suspect that they were haunted by ghosts of both kinds. But the move is under bad signs anyway: wife Catherine (Amanda Seyfried) works as a restaurateur and sees no professional future there, the additional pressure seems to promote her bulimic disease.

But husband George (James Norton) got a job as a lecturer in art history at a small college in the Hudson Valley after completing his dissertation - so the decision has been made, Catherine should concentrate entirely on her three-year-old daughter. Simple feminist basic tones can already be heard here, which are to be expanded into a meta-level about female solidarity in the course of the almost two-hour film. Like many other plot elements, however, these approaches then come to nothing.

The directing duo Shari Springer Berman and Robert Pulcini (“American Splendor”), who also adapted the script, staged the “haunted house horror” very conventionally: On the first night before George is supposed to take up his position, Catherine smells exhaust gases in the bedroom, the little daughter sees her night light flickering, a rocking chair begins to rock out of nowhere.

Not only because these effects are well known, but also because they are immersed in warm light in “Things Heard & Seen” in an almost cozy atmosphere with country house charm, they do not develop any great horror. In any case, the plot draws less from its short-lived moments of horror than from its step-by-step character development and exposure as well as the tension associated with it.

While the former is mainly the result of Catherine who stayed at home, who gradually finds out more about the brutal deaths of the dairy farmers who previously owned the house, George is increasingly turning out to be a more vicious version of the "talented Mr. Ripley" after Patricia Highsmith.